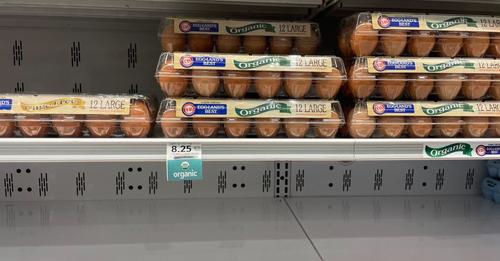 Rising Egg Prices
PASCO COUNTY, Fla. — This is something that might actually give you some sticker shock if you haven't been paying close attention. The price of a dozen eggs. We snapped these pictures at a local Publix, where it's $5.79 and more than $8.25 for a dozen.
Wholesale prices aren't looking much better, either. Right now, the average price for a dozen of eggs is $4.33.
That's a massive increase from a year ago when that average cost was just $1.33. This is where businesses are feeling the impact of rising costs
You’ve probably seen how much a dozen eggs cost at the store and thought, maybe I don’t need eggs right now. Well, imagine needing to buy it in bulk every day.
"The egg crisis is the worst from everything. It's the worst that we've ever been," Jennifer Franks, the owner of Mmmm Delicious Cupcakes in New Port Richey, said.
Franks said these skyrocketing egg prices forced her to lay off half her staff.
"The cost of the eggs and the butter, it pays a person’s staff. That's how much that the eggs and the butter have gone up," Franks explained.
Franks is pivoting as she works double shifts with little to no profit, upping prices by a dollar, even closing early when goods run low.
"It's very scary. It's the first time in 13 years we've had these thoughts of I don't know if we're going to make it through this because if eggs get up to $10 a dozen and I use eggs and butter on an everyday basis. What am I supposed to do?" Franks added.
The USDA said nearly 58 million birds have been infected with avian flu as of this month, making it the deadliest outbreak in U.S. History.

And while one economist we sat down with says avian flu is a problem, he doesn’t think these price hikes are a direct result of supply chain issues, but instead, big market egg producers upping their prices because, well, they can.
“Six dollars a dozen. That’s high. That’s high by anybody’s standards. I don’t think they’ll stay that high... If you think back to what it was before this price increase, a dozen eggs were a couple bucks. So, my guess is it will end up somewhere between $2 and $6," Michael Snipes, USF Economics Instructor, said.
Storrs Dunklin runs Bud’s Yard Eggs out of his backyard in Hudson.
He sells a dozen chicken eggs for four dollars which is a hot ticket item that he now can’t keep up with.
"It has pretty much gone out of control. Our egg we were selling anywhere from three to 4 in a day. And now we have a commitment for 20 dozen a day," Dunklin said.
Dunklin is adding more animals to his roster in order to help families and local businesses in need of eggs.
"What we're going to do to try to help the situation is to try to get more chickens and we're going to try to maintain our price as low as we can," Dunklin added.
As for Franks, she’s hopeful egg prices will drop, which would allow her to keep her family business afloat.
But for now, she’s asking for a little compassion and maybe even a donation.
"If you're a girl scout troop, if you're a family who wants to do something for someone, go buy a couple of dozen eggs and surprise a local baker with them. They are going to be over the moon ecstatic right now," Franks explained.